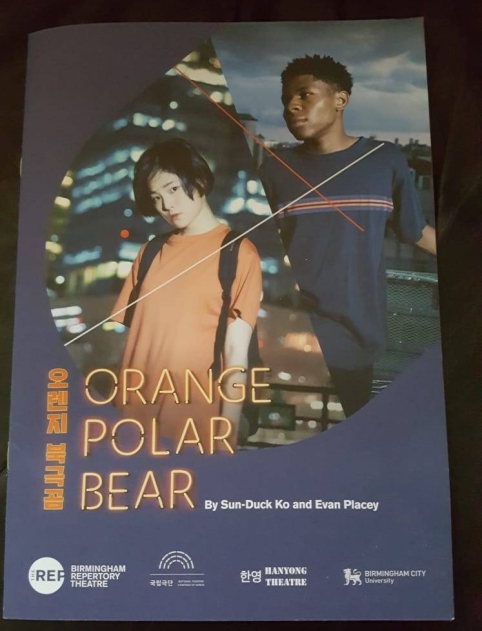 This innovative original work is a collaboration between Birmingham Repertory Theatre, Hanyong Theatre company and the National Theatre of Korea in association with Birmingham City University.

The Orange Polar Bear by award winning playwrights Sun-Duck Ko and Evan Placey was created following a series of workshops with groups of young people in Birmingham and Korea focusing on the concerns young people face growing up in this century.

Performed in English and Korean, The Orange Polar Bear tells the story of two 15 year old teenagers, British William and South Korean Jiyoung who are both “living invisible lives in chaotic cities on opposite sides of the world”.

The simple white stage design, effective use of lighting and video imagery combined with composers Jang Yeong-Gyu haunting score creates the atmosphere of this modern piece.

The cast of six extremely talented actors (four of them playing more than one character of differing ages) comprising of actors from South Korea and the UK, work well together to create a piece of realistic and emotional theatre.

Rasaq Kukoyi gives a strong performance as the angry frustrated William, and we look forward to following the career of this very talented young actor.

Minju Kim gave an outstanding performance as Jiyoung. Although English translation in the form of subtitles ran across the back of the stage, I did not read them, as I found myself being drawn to the teenage angst captured in Kim’s performance.

Orange Polar Bear is a fresh, funny, artistic piece of theatre that draws the viewer effectively into the stressful, sometimes traumatic life of a teenager, and certainly gave this adult something to think about.

We say: “Orange Polar Bear is a fresh, funny, artistic piece of theatre that draws the viewer effectively into the stressful, sometimes traumatic life of a teenager, and certainly gave this adult something to think about.”