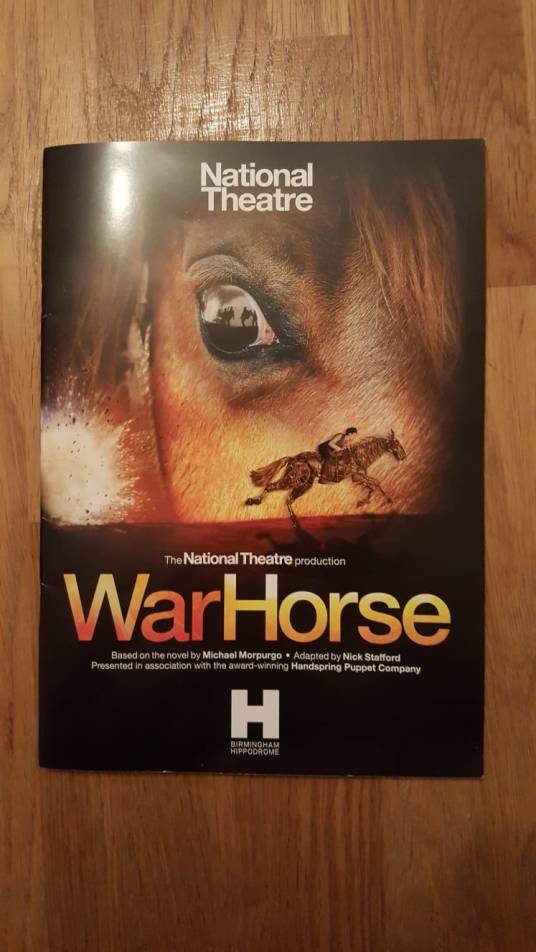 Coinciding with the centenary commemorations of the end of the first World War, the National Theatre’s acclaimed play War Horse is currently on its second national tour of the UK.

Based on the children’s book by Michael Morpurgo, War Horse tells the story of Albert and his horse Joey. When war breaks out Albert’s father sells Joey to the Army for a hundred pounds as a cavalry officers’ charger.  Heartbroken, 16-year-old Albert lies about his age to enlist into the army and sets out on a dangerous journey to find his beloved horse.

Suspended above the stage is a 25-metre-wide projection screen in the design of a ripped page from a sketch book. The black and white drawings of theatre designer Rae Smith are projected on to this screen and provide the visual backdrop to the story. The drawings quickly change between each scene transporting the viewer from the tranquility of rural Devon to the battlefields of the Somme.

Bob Fox as the song man, drifts in and out of each scene, his stunning vocals and accomplished accordion playing effectively brings “song maker” John Tams beautiful folk songs to life; the haunting lyrics used so effectively to tell this story.

The 12 strong team of highly talented puppeteers play Joey and Topthorn in rotation at different performances, all puppets are designed and made by the Handspring Puppet Company from South Africa.

I completely forgot that Joey and Topthorn were puppets, as each team of three puppeteers skilfully created a realistic horse that gallops, charges and whinnies across the stage, as they deliver Toby Sedgwick’s choreography with precision.

There are strong performances from Thomas Dennis as Albert Narracott and Jo Castleton as his mother Rose. They have excellent chemistry with each other creating a believable mother and son relationship.

War Horse is a powerful reminder of the futility of war, demonstrated poignantly in a scene following a battle of the Somme. When the machine gun fire stops, silence envelops the auditorium as the viewer is left to reflect on the bodies of horses and young men lying across the stage.

War Horse is a beautiful, artistic, moving production that took me on a journey of emotions from laughter to tears, and left me with renewed respect for all men, women and animals who lost their lives during the Great War.

War Horse was at the Birmingham Hippodrome until 17th October 2018 and now continues its national tour.

We say: “War Horse is a beautiful, artistic, moving production that took me on a journey of emotions from laughter to tears. A must see!”