The Place For Me 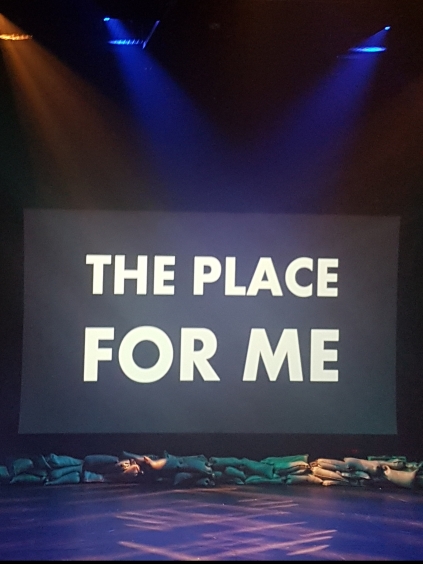 The Young Rep Lightpost company is made up of young black and mixed heritage men aged 18-25 from across the West Midlands who “take pride in telling unique and heartfelt stories”.

The Place For Me was created by the company using various accounts of the first Caribbean migrants who travelled to the UK in 1948 on The Empire Windrush, to produce a story that the group felt “deeply connected to”.

The piece tells the story of Elrick Seph Thompson who grew up in Jamaica, was in active service in World War Two and travelled to England with other friends hoping to find “the place for him”.

Directors Philip Morris and Keiren Hamilton-Amos have produced an honest, warm, emotional piece of theatre. In this short one set play, packing cases, crates and sand bags created a ship/dockyard environment serving as a constant reminder to the viewer of the continuous journey of the characters. Costumes reflected the era, transporting the audience into post-war Britain.

News commentary and photographs were projected onto the back of the stage which informed the audience of the struggles and injustice still faced by the Windrush generation 70 years later.

This is a very talented company, who work extremely well together. The chemistry and unity of this cast resulted in a powerful piece of theatre which took the audience on a rollercoaster ride of emotions.

In the principle role, Josef Hyland gave an outstanding performance as the likeable, optimistic, enthusiastic Elrick. Hyland has fantastic stage presence, holding the audience’s attention throughout this production.

The entire cast were thoroughly deserving of the instantaneous standing ovation from the appreciative Birmingham audience. The Place For Me and this cast would not be out of place on a London stage such as The Young Vic. We look forward in anticipation to their next production.

The Place for Me was part of the For/With/ By festival of European Youth Festival that ran at the Birmingham repertory theatre from the 30th July until 3rd August.
MT

We say: “The Place For Me is an important, effective and powerful piece of theatre which deserved the instantaneous standing ovation!”