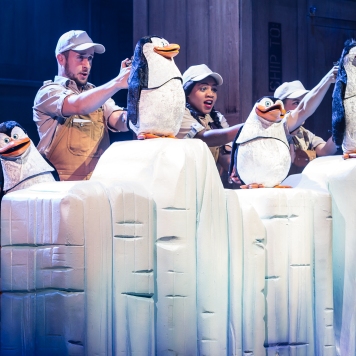 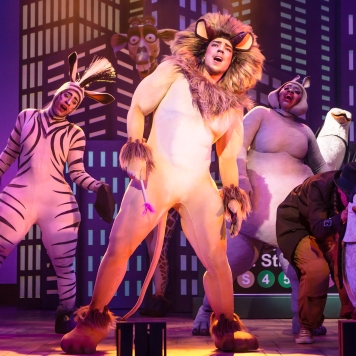 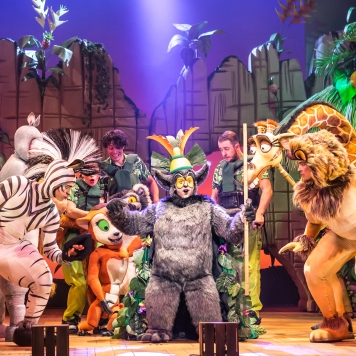 Madagascar is a brand new musical based on the 2005 DreamWorks animated movie of the same name; with music and lyrics by George Noriega and Joe Someillian and a book by Kevin Del Aguila.

The story tells of Alex the lion, his best friend Marty the Zebra, Melman the Giraffe and Gloria the Hippo who escape from their home in New York’s central park zoo and find themselves on a journey to King Julien’s Madagascar.

Director Kirk Jameson has created a bright and energetic production; puppets are used effectively to create the familiar movie characters of the penguins, monkey and lemurs. Costumes and set designs by Tom Rodgers are clever and colourful reflecting the environments of both Central Park Zoo and the wild landscape of Madagascar. The showstopping set and costumes draws the audience into this fun and entertaining world.

Fabian Aloise’s energetic dance routines are delivered with precision and style by the very talented ensemble, who were also skilful puppeteers.

Jamie Lee-Morgan is very entertaining as the hypochondriac Melman the Giraffe. He has great comedic ability and breathed life into DT’s favourite Madagascar character – Melman.

Matt Terry makes his musical theatre debut as Alex the lion; creating a warm and believable character. Terry has a marvellous voice delivering each song with emotion and power.

Jo Parsons gives an impressive performance as King Julien causing the younger members of the audience to giggle and clap along with each song he sang in sheer delight.

The outstanding performance of the night for me was Antoine Murray-Straughan as Marty the Zebra, who can not only rap but also has a fabulous voice; very good stage presence and delivers the dance routines effortlessly. Antoine is definitely a force of nature in this production.

The finale bought the Birmingham audience to their feet proving that the West Midlands really knows how to “move it!”.

A family feast of a musical!

We say: “Madagascar had Birmingham moving in this delightful production! A family feast of a musical!”

Back into action and cramming in theatre to make up for all the lost time! ♥️
Friday evening by the sea, ahead of theatre fun in Chichester tomorrow ♥️
And just like that, we are back in a theatre for the first time since March 2020 😭❤️
Ready to spend time in Washington Heights with @intheheightsmovie 🎉🎉🎉💕
Loved every minute of #theshowmustgoon tonight and @marcus.harman delivered the chills with his performance @dearevanhansen ❤️💕
Sunday's in Brighton ☀️