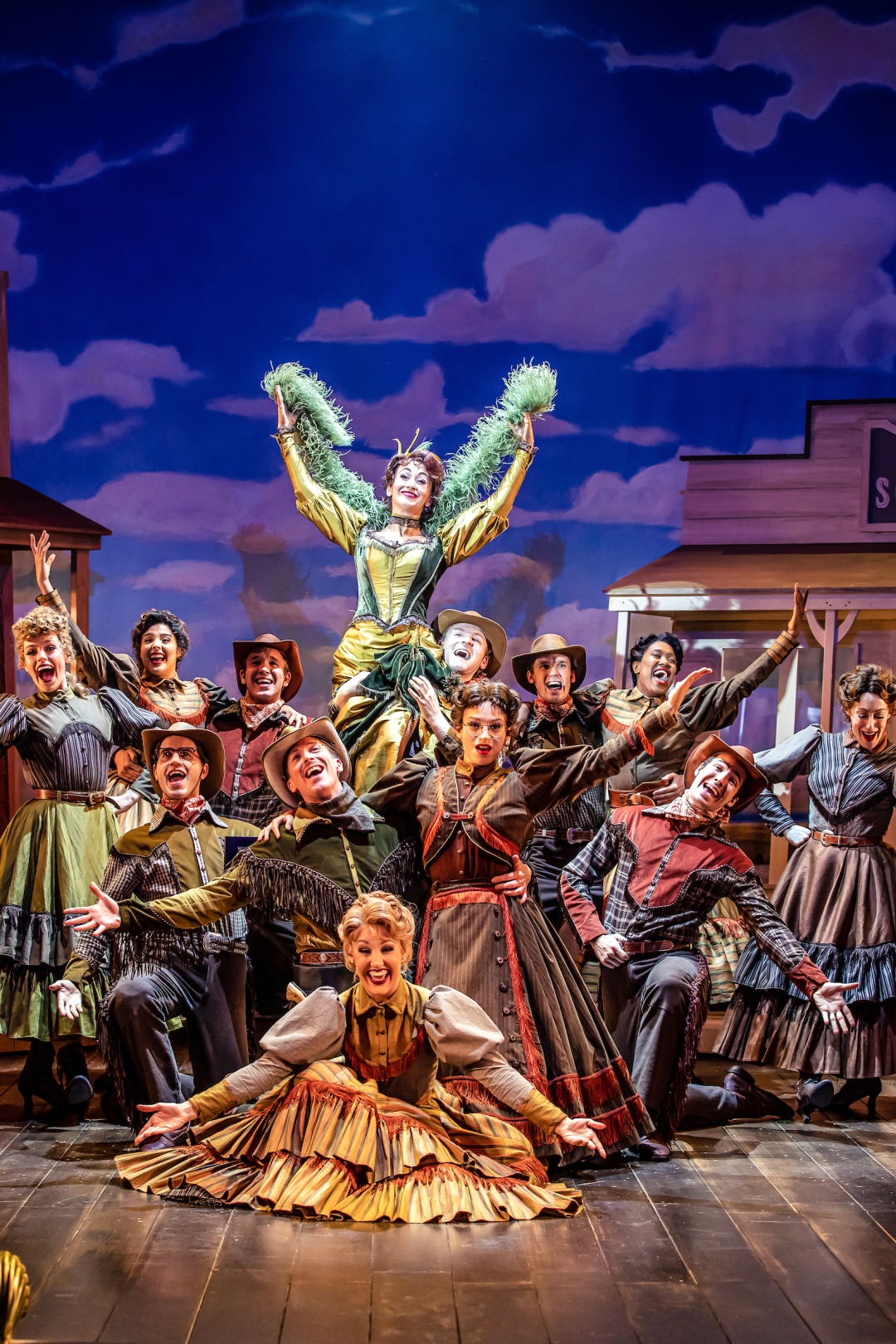 Curtains – A Musical Whodunnit is based on the book by Peter Stone; with lyrics by Fred Ebb, additional lyrics by Kander & Rupert Holmes, music by John Kander, and a book by Rupert Holmes.

Curtains opened on Broadway in 2007 to mixed reviews and received eight Tony Award nominations, with David Hyde Pierce going on to win the Tony for best performance by a leading actor in a musical. The first UK professional production of Curtains opened in 2012 at the Landor theatre, Clapham, London where it received positive reviews. In 2019 a brand new production of Curtains is currently touring the UK.

Set in the 1950s and described as a “show within a show”, Curtains tells the story of Jessica Cranshaw, star of the Broadway bound musical Robin Hood, who is murdered on stage in Boston on opening night, resulting in the entire cast and crew being suspects. Enter musical theatre fan, local detective Lt. Frank Cioffi who sets out to solve the crime.

Kander and Ebb’s score, delivered with enthusiasm by the orchestra under the direction of Alex Beetschen creates the mood of musicals associated with the 1940s and 1950s.

Director Paul Foster draws the viewer into the backstage world of theatre culture. David Woodhead’s detailed set that changes seamlessly throughout the piece, together with Alistair David’s intricate choreography that features different styles of dance including jazz, ballet and ballroom combine perfectly to create a visually impressive production.

Samuel Holmes is great fun as director Christopher Belling; delivering the one liners with superb comedic timing and just the right amount of sass that the part requires. Emma Caffrey as vulnerable starlet Bambi Bernét delivered the intricate choreography with amazing skill and precision.

DT has previously seen Carley Stenson in the role of Fantine in the West End production of Les Misérables and was impressed by Stenson’s vocal performance. Stenson did not fail to disappoint and gives a strong leading lady performance as Georgia Hendriks, her vocal delivery particularly in the number Thataway! was effortless and impressive.

We have seen Jason Manford perform live earlier this year as the host of the 2019 Olivier awards and were impressed by his charisma and vocal delivery. Manford is completely at ease on stage and appears to have fun with the comedy elements of the character detective Frank Cioffi resulting in an enjoyable performance.

We have previously seen Rebecca Lock perform as Ms Fleming in one of DT’s favourite musicals Heathers at the other place in 2018, and really enjoyed her performance. Lock delivered magical vocal performances as no nonsense Carmen Bernstein, full of emotion and power, and for us delivered the outstanding performance of the evening.

We are always delighted when we see a show of West End quality at the Alexandra (our favourite local theatre). With a splendid musical score by Kander and Ebb, likeable characters, combined together with strong performances from a talented ensemble cast, Curtains is a thoroughly entertaining musical mystery comedy.

Curtains – A Musical Whodunnit runs at the Alexandra theatre Birmingham 5th – 9th November when it continues its UK tour.

We Say: “Curtains is a West End quality musical mystery that will keep you guessing (and laughing) until the curtains fall!”

Finished off a two show day with a trip to @bonnieclydeldn @artstheatrewestend 💕
OBSESSED
Last night we got lost in the beautiful world of Irish dance with @michaelflatleyofficial @lotdofficial at the @thealexbham. Still a timeless piece of breathtaking theatre.
After a month away we were back to the theatre last night with @qbmts local premiere production of Shrek The Musical which was insanely good. Review on the blog 🥳
@lifeofpiwestend
Kinda obsessed with this ballet ❤️🐉