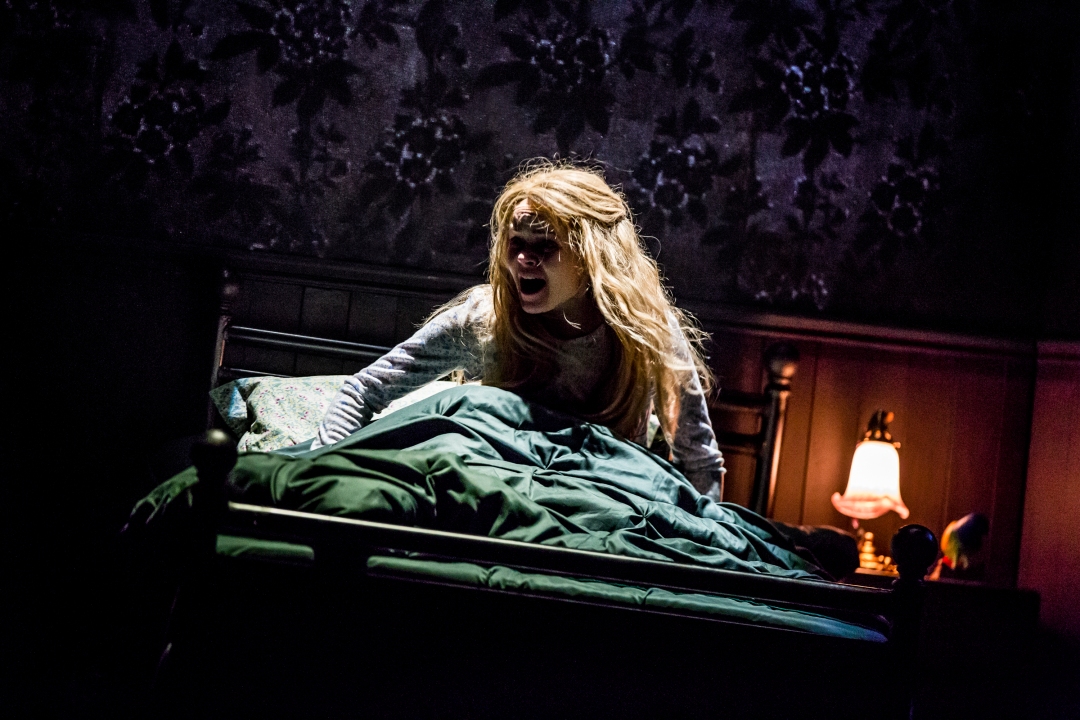 Horror and Halloween are loved in my household and The Exorcist is a firm favourite (especially the extended edition with that spider walk scene…) so when we first heard that The Exorcist was being adapted for the stage we made sure we had our tickets to see it at The Birmingham Rep in 2016 at it’s UK Première. In 2016 the production was still ironing out its kinks, so I was excited and intrigued to see how the 2019 production had developed at it’s Press Night at The Alexandra.

Many are familiar with the best-selling novel by William Peter Blatty and everyone is familiar with the 1973 film adaptation, which won two Academy Awards and terrified audiences worldwide. What is widely considered a cinematic horror masterpiece, William Friedkin’s The Exorcist filled audiences with fear and many even fainted from the fright. Some people won’t watch it, you won’t catch our MT near the film, and new fans of horror are discovering it for the first time. Years later, The Exorcist is still having an impact.

Inspired by true events, the story has been adapted for stage by John Pielmeier and directed by Sean Mathias, featuring the voice of Ian McKellen as the Demon. The story tells of Regan, a young girl who develops symptoms that baffle medicine and resemble demonic possession. Her mother Chris turns to the Catholic Church to help battle the evil force that has taken over Regan, a battle where even the holiest are tested.

This production is designed by Olivier Award winning set designer Anna Fleischle with lighting design by multi-award winning designer Philip Gladwell. Anna has created instant atmosphere alongside Philip’s blackouts, flashing lights and solo spotlights. The first blackout had the Birmingham audience in shrieks of terror and hysterics which added to the atmosphere of the piece. Composition and Sound Design is by Tony Award winning Adam Cork. Immediately as you enter the theatre you are met by unnerving sounds of mutterings and church bells which are relentless throughout the production. Illusions are by Gold Star Member of the Inner Magic Circle Ben Hart and projection Design is by long-time collaborators Jon Driscoll and Gemma Carrington. A classic story like The Exorcist needs this force of creation behind it.

The entire cast of this production gave confident and charismatic performances which were well received by the Birmingham audience who gave standing ovations at the end. Susannah Edgley conveys the terror that young Regan endures with such poise and innocence making for a remarkable (and terrifying) performance. Sophie Ward as Chris MacNeil captured the torment of a mother whilst Tristram Wymark as Burke Dennis brought much needed light and comedy to the production. Our heroes to save the day and Regan’s soul, came in the shape of Joseph Wilkins as Father Joe, Ben Caplan as Damien and Paul Nicholas as Father Merin. I really loved the angsty passionate performance by Caplan as Damien as he battles his own conflicting beliefs.

After watching the production at it’s UK première , it was refreshing to see how the production had developed since the first time I saw it in 2016. This is now a confident production and it knows exactly what it wants to deliver, which it does, in a sleek fashion. I was absorbed in the atmosphere, in every little detail and every special effect. There is still something missing from this production for me and I’m not quite sure what that is. Maybe it’s my favourite infamous spider walk? However, if you want a memorable, thrilling night out at the theatre then look no further than this production which is a fantastic adaptation of the masterpiece of horror that is The Exorcist. Be warned! Head’s will spin!

We say: “This spine-tingling production of a classic horror masterpiece will leave your head spinning!”

@lifeofpiwestend
Kinda obsessed with this ballet ❤️🐉
Had a lovely visit to an absolute classic on Tuesday @phantomopera 💜🎭
Our first time seeing the spectacular @diversity_official on stage @thealexbham.
A magical evening at the @olivierawards 🥰
Spending #iwd2022 together with the simply spectacular @lionwitchonstage @thealexbham ❤