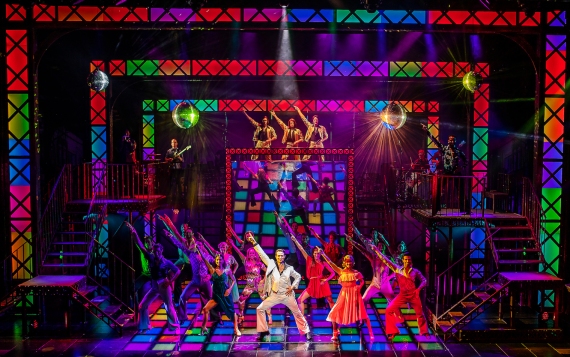 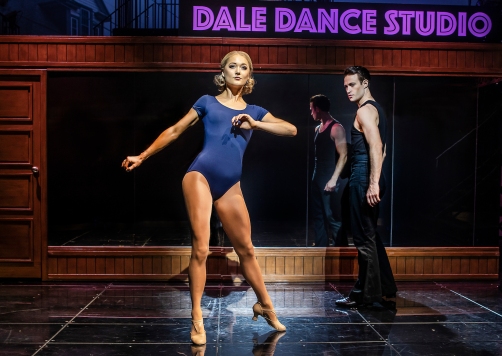 When you think about Saturday Night Fever, you think about the 1977 John Travolta classic film and iconic movie soundtrack that featured the greatest hits of the Bee Gees such as Stayin’ Alive, How Deep Is Your Love and Night Fever.

MT has often told me about how she queued around the cinema to see the movie as it became a big hit of her generation and was the first X-rated (18) film she saw. I think mine was the Passion of Christ – not as cool. Even in the present day, Saturday Night Fever is still a big hit in both our households. We both even saw the original 1998 West End production of this hit film which featured Adam Garcia as ‘Tony Manero’ and Anita Louise Combe as ‘Stephanie Mangana’.

To celebrate and mark 40 years since the UK Cinema release of this classic film, this Bill Kenwright production of Saturday Night Fever has been “reimagined into a big new music and dance extravaganza”. The musical is based on the Paramount/RSO Film and the story by Nick Cohn. It has been adapted for the stage by Robert Stigwood in collaboration with Bill Oakes.

Saturday Night Fever tells the story of Tony Manero, who lives within the working-class Brooklyn life who uses his astonishing talent for dancing as an escape from his world. The musical plot is very similar to the motion picture film. Saturday Night Fever is a raw, gritty movie and we felt that the edge was not lost in this musical production.

Director and Producer Bill Kenwright has created a sleek, discotastic (let’s create a word) vibrant production. With energetic, flawless, theatrical and artistic choreography by Olivier Award winning Bill Deamer, classic designs by Gary McCaan, bold lighting by Nick Richings, and fabulous sound by Dan Samson. This production had the audience of Birmingham on their feet.

Richard Winsor, (Matthew Bourne Company, Streetdance The Movie and Casualty star), played Tony Manero. Richard has a mesmerising presence on stage and oozed charisma in this sexy, iconic role. Winsor commanded the stage and all of your attention, bringing both the light and darkness of this well loved character to life. Richard was outstanding and I look forward to catching his dance performances in the future.

Kate Parr (Follies) played the role of Tony’s dance partner and potential love interest Stephanie. Parr glided across the stage with a beautiful elegance, highlighting not only her incredible dancing ability but her amazing vocals in What kind of fool.

Owen Broughton (Gus), Michael Cortez (Joey), Raphael Pace (Bobbie C) and Jared Thompson (Double Jay) were the best friends of Tony Manero. The electric chemistry between these talented actors and dancers meant that the ‘gang’ and friendships were believable.

We both particularly enjoyed the addition of the Bee Gees as the singers that accompany the production. The three really added another depth to the musical that elevated the musical pieces and made you feel like you were right on the dance floor of the 2001 Odyssey club. Ed Handoll (Barry Gibb), Alastair Hill (Maurice Gibb) and Matt Faull (Robin Gibb) sang the hit soundtrack of the disco classics with ease and they all sounded wonderful together.

The highlight of this production were the outstanding dance routines by the extremely talented ensemble of dancers and the entire cast. They made every move appear to be effortless, with every step oozing confidence and attitude.

It has been a long time since I last saw a production of this favourite and I am glad this production did not disappoint, however, it has now ignited my love for disco.

Now can I have a disco ball in the house please? 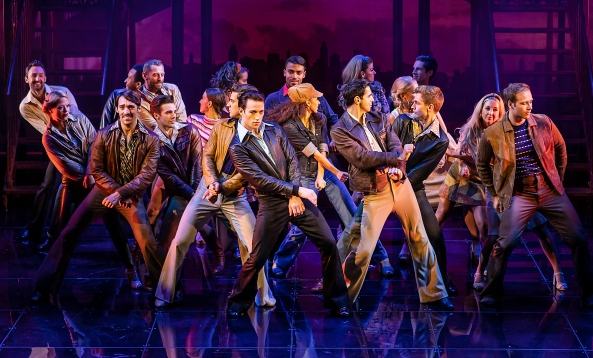 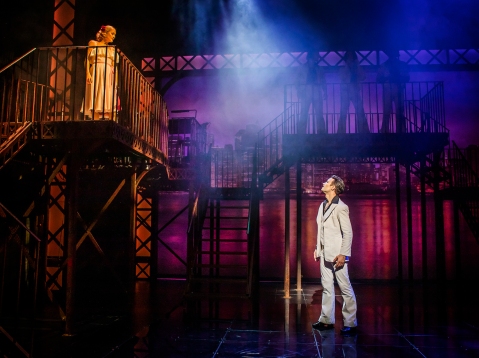 We say: “@RichWinsor ‏is a dream as Tony Manero. Time to strut your way onto the dance floor with this smooth, sexy, vibrant production of a cinematic classic!”