Phantom of the Opera – QBMTYS

Quarry Bank Musical Theatre Youth Section (QBMTYS) was launched in 2017. Their 2018 production was the epic musical The Phantom of the Opera (youth group production).

With music by Andrew Lloyd Webber, lyrics by Charles Hart and additional lyrics by Richard Stilgoe, The Phantom of the Opera opened in London in 1986 and is currently the second longest running musical in the West End.

Based on the 1909 French novel Le Fantôme de l’Opéra by Gaston Leroux, the story tells of a beautiful soprano Christine Daaé, who becomes the obsession of the “phantom”, a disfigured musical genius, who lives in a dark underground lair beneath the Paris Opera house.

Having seen Phantom at Her Majesty’s theatre in the West End last year, I was very interested to see how (and to be honest if), an amateur group could successfully tackle a production known for its spectacular effects, difficult operatic vocals and iconic musical score.

This talented youth company under the guidance of director/musical director Richard Ganner and choreographer Zoe Russell very quickly dispelled any doubts I had.

The ballet chorus of the Opera Populaire danced their routines with grace, style and precision, accompanied by a 16-piece orchestra whose professional delivery of the beautiful Lloyd Webber score, in my opinion, was the best performance I have heard by a non-professional orchestra this season.

The full company’s delivery of Masquerade, where costumes, staging and vocal arrangements combined perfectly together to create a visual and aural spectacle, was one of the highlights of this production.

Ollie Hart-Bradford and James Bastable as theatre owners Monsieur André and Monsieur Firmin gave good strong performances with wonderful vocals. Ollie and James had great chemistry, “bouncing” off each other to create a believable double act.

Helen Sanders gave a strong believable performance as the strict serious mistress of the ballet Madame Giry, with Shannon Lee delivering a delightful performance as her dancer daughter Meg.

Oliver Keeling gave a strong performance as the charming Raoul. Keeling had excellent chemistry with leading lady Alex Cooper. I particularly enjoyed their duet All I ask of you.

Alex Cooper gave an outstanding performance as Christine Daaé. Her amazing soprano voice combined wonderfully with her skilled acting ability. Cooper’s rendition of Wishing you were somehow here again reduced me to tears, as she delivered the song with emotion and maturity.

Alex Cook gave an outstanding performance as the Phantom. Cook delivered the iconic songs with ease, his powerful voice soaring through the auditorium. I particularly enjoyed Cook’s rendition of The point of no return. Cook used his accomplished acting ability to display the pain and loneliness of the Phantom, (which reduced me to tears – yes I cried a lot in this production!) as well as the sinister dark side associated with this character.

This was a thoroughly enjoyable production by an extremely talented company, with individuals who have the potential I am sure, to have successful professional careers. Theatretastic looks forward to following the futures of these individual performers and this wonderful company.

Phantom of The Opera ran at Stourbridge Town Hall from the 19th to 22nd September 2018. 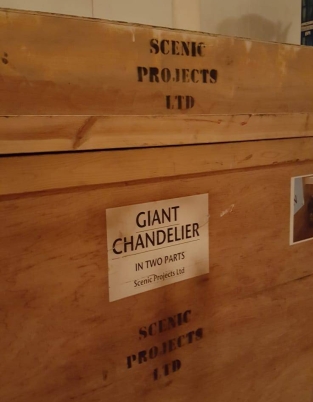 We say: “A spectacular performance of this iconic musical delivered with power and emotion by this extremely talented company. Bravo QBMTYS!”

Happy Valentines Day ❤️💞
Happy #galentinesday to all the amazing ladies in your life! 🤩
Finished this beast of a jigsaw a week ago and it's time to dismantle 😂 Just looking at it takes us back to St. Peter's in Rome.
Tonight we 'Light the Darkness' and stand against prejudice and hatred in the UK and around the world.
It's the mama part of Theatretastic 60th birthday today! ❤️😍🎊🎉
Sunday viewing with the help of Remy watching @ratatousical 🐀🎭❤️