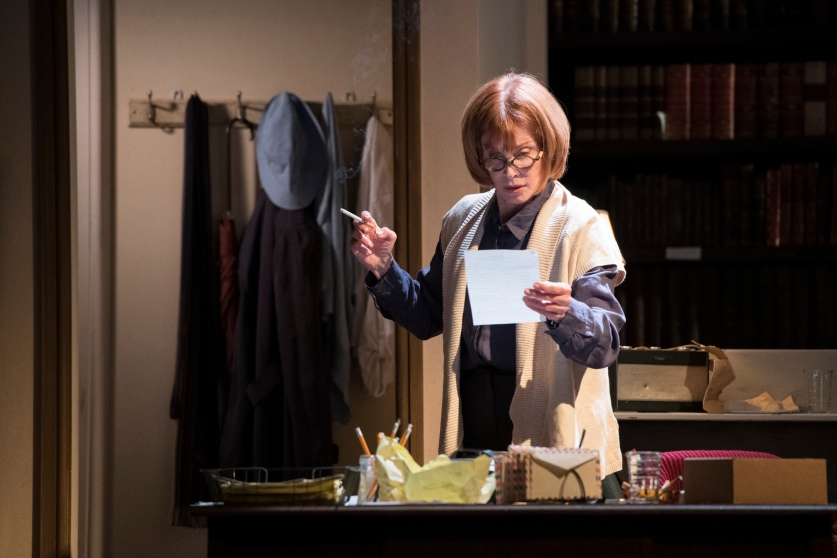 We currently live in a digital world, where most of us communicate with each other using email or social media.

84 Charing Cross road transports us back to a time when correspondence involved detailed descriptive written accounts of everyday events and plans and hopes for the future. Receiving a letter from overseas was a particular delight.

Adapted from Helene Hanff’s bestselling book of the same name by James Roose-Evans, this production tells the true story of the 20-year correspondence between Hanff and Frank Doel, the chief buyer of Marks and Co. Booksellers. Spanning a period from 1949 until 1969, the production paints a social picture of Britain from post war through to the brash bright 1960s.

This is a touching story of two people brought together by their love of literature. Hanff, a New York writer, contacted the bookshop in 1949 (a supplier of rare second-hand books) and a warm long-distance friendship developed between her, Doel and other members of staff. This resulted in the exchange of Christmas and Birthday gifts, aswell as Hanff sending parcels of food to a Britain still reeling from the effects of War.

Designer Norman Coats’s set is cleverly spilt into two areas. The left-hand side of the set pulls the viewer into the creative room of a writer, complete with a manual typewriter, bottles of gin and screwed up balls of coloured paper strewn across the floor. The right hand side of the stage perfectly creates a book shop of years gone by. Numerous oak book cases stretching across the back wall of the set that were so realistic, I felt I could smell the musty atmosphere. Effective use of lighting by designer Chris Davey draws the viewer to the appropriate area of the stage.

The small supporting cast are very talented. They all created a believable character in addition to each one playing various musical instruments, which created the mood of various seasons and events throughout the piece.

Clive Francis gives a wonderful performance as Frank Doel. He creates a character that starts off as being very business-like and “British”, into a man that is charming and kind, as the viewer sees his personality exposed as the friendship between Doel and Haniff develops.

Stefanie Powers (the actress well known for the TV series Hart to Hart) creates the outspoken, witty, New Yorker Helene Hanff with humour and warmth and I found her performance captivating.

Even though there is no main interaction between the main characters, as each one reads their letters from each other in their separate sets, the chemistry between Francis and Powers is excellent. The audience see their relationship blossom and grow over the years.

Director Richard Beecham has created a charming and endearing piece of theatre which is enhanced by the wonderful performances of Powers and Francis.

If you are looking for an evening full of warmth and nostalgia, I suggest you take a stroll down to 84 Charing Cross Road. I guarantee you will not be disappointed.

84 Charing Cross runs at the Grand theatre Wolverhampton from 29th May to 2nd June when it continues with it’s UK tour until 30th June.
DT

We say: “With excellent performances from Stefanie Powers and Clive Francis, 84 Charing Cross Road is a charming, endearing, nostalgic piece of theatre magic!”