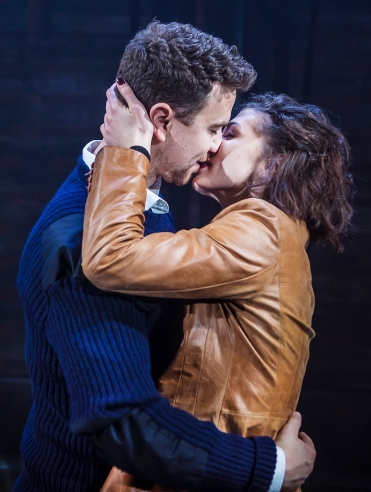 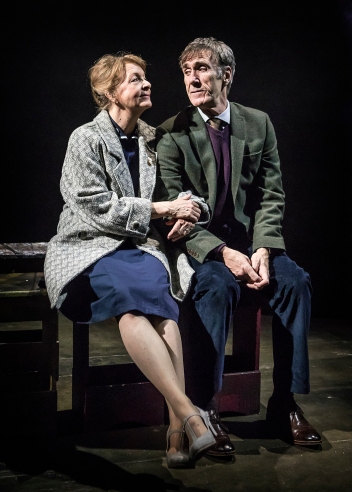 From the opening anthem We got nowt else, quickly followed by The island of souls, with its descriptive lyrics and haunting harmonies, I sailed away on the “Last Ship”.

This Tony nominated musical, opened at the Neil Simon theatre on Broadway in October 2014 and ran until January of the following year.

In the UK production directed by Lorne Campbell, changes have been made to the original story. Some characters have been removed and the ending altered reflecting current political issues, such as the future of the NHS. The changes make the political message of this piece relevant to today’s generation.

Stage design by the Tony award winning company, 59 Productions, is exceptional. The staging perfectly recreates the industrial setting of the era complete with iron staircases, steel girders and cranes that shudder into action. Images such as stain glass windows and interiors of rooms are effectively projected onto the stage.

With an original score and lyrics by Sting this musical (based on the concept album Soul Cages together with his childhood experiences), tells the story of Gideon Fletcher, the son of a North East shipyard worker, who chooses a life in the navy rather than following previous generations into the shipbuilding industry.

17 years later Gideon returns to Wallsend, hoping to reunite with Meg, the girl he left behind, who he now realises, he has always loved. Meg is very reluctant to re-kindle her relationship with Gideon and even more reluctant to tell him, they have a child.

This piece of musical theatre is set in the 1980s at a time when industry was closing throughout the country, destroying the communities whose identity has been formed by people’s places of work.

In the Wallsend shipyard, sits a half built ship, “The Utopia” towering over the terraces. Here we find foreman Jackie White, his wife Peggy and the workers of Swan Hunter, who are on strike, fighting to protect their jobs and community. When the men are betrayed, they throw caution to the wind and take bold, daring action.

There are strong performances from Charlie Hardwick and Joe McGann (Peggy and Jackie White) who have excellent chemistry and are believable as the couple trying to hold everything together.

Frances McNamee gave the stand out performance of the show for me as the strong independent Meg. She has a beautiful voice, and her rendition of If you ever see me talking to a sailor, was just superb.

On the opening night Sting himself joined the cast on stage for the encore, which was really appreciated by the Birmingham crowd.

This is an outstanding piece of musical theatre and I class myself as incredibly lucky to have been able to see both performances and a production of such high quality at my favourite local theatre (the Alex). I would not be at all surprised to see the Last Ship sail (sorry!) into the West End.

The Last ship runs at the New Alexandra theatre from the 16th – 22nd April then continues on its national tour.

We say: “The Last Ship is an outstanding piece of musical theatre and Frances McNamee is superb! This production deserves to sail straight into the West End.”