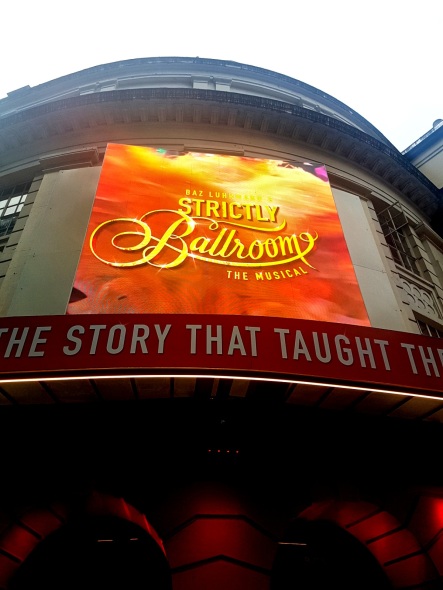 Strictly Ballroom is my favourite Baz Luhrmann film. The characters, story, dry wit and breathtaking dancing make it a true classic for me.

MT and I often quote some of the best lines from the film in casual conversation. Of course, I deliver them with my best (terrible) Australian accent.

When I found out that the film had been adapted to the stage I was desperate to see it. The first UK staging of Strictly Ballroom The Musical had its première at the West Yorkshire Playhouse, Leeds on Wednesday 30 November 2016, playing a season through until Saturday 21 January 2017. I wished for a West End transfer and my musical genie made the wish come true.

Now playing at London’s Piccadilly Theatre, Strictly Ballroom has lit up the West End with its energetic and dazzling presence. Director and choreographer Drew McOnie has breathed life into a cinematic classic and made a sensational piece of theatre.

With costumes by four-time Oscar-winner Catherine Martin, the cast of Strictly Ballroom are bold and bright as they effortlessly glide across the stage in the classic ballroom sequences.

For those not familiar with the story, Strictly Ballroom tells of Scott Hastings and his radical dance moves which cause a commotion with the Australian Federation. Wanting to dance his own steps, he starts to dance with Fran, a beginner and an outcast from the world of dancing. The story tells of their courage to defy the rules and to show the world that to win you don’t need to dance “strictly ballroom”.

We went to a Saturday evening performance as a group of four (MT, myself, my aunty and sister) on our weekend in London. We had high hopes for the production after reading the reviews and knowing of the standard of talent involved. None of us were disappointed.

Zizi Strallen is glorious as Fran. She is already a favourite with MT after she saw her in the 2017 production of Follies, but this was the first time I got to watch Zizi in action. We can only describe her as the triple threat. She is an impeccable dancer, effortless actress and beautiful singer. Zizi captured the essence of Fran and her flawless comedic timing only made the audience love Fran (and Zizi) more.

Jonny Labey commanded the stage with his dynamic dancing and powerful stage presence. There was an electricity between Jonny and Zizi which should be bottled and sold on.

There were so many outstanding performances in this production. I had to look twice when I saw Stephen Matthews as Doug Hastings, who looked almost identical to the character in the film, Stephen captured the qualities of Scott’s father that fans of the film will appreciate. The dance scene with Stephen and Anna Francolini (Shirley Hastings) was a personal favourite. Will Young as Wally Strand was a perfect razzle-dazzle host and helped the production flow seamlessly as he narrated the story with his soothing vocals.

The musical score included classics from the film such as Perhaps, Perhaps, Perhaps, Love is in the air and Time after Time. The music complimented the production and the addition of so many classic hits only added to the contemporary feel. I would have liked to have heard Fran and Scott sing for slightly longer together as both Jonny and Zizi had wonderful voices.

Other personal favourites were Gary Watson’s performance as Ken Railings, who made us laugh and smile throughout. Fernando Mira as Rico also dazzled as he taught Scott how to dance the real Pasodoble with passion and raw energy.

Strictly Ballroom – The Musical deserved the standing ovation that night and every night that it runs in the West End. A true gem of a show that had me smiling from start to finish and made me feel lucky that I got to share in a little bit of dancing theatre magic.
DT

We say: “Strictly Ballroom – The Musical is a true gem of a show that had us smiling from start to finish. Audiences are witnessing theatre magic in this beautiful, funny, bright and dazzling production.”