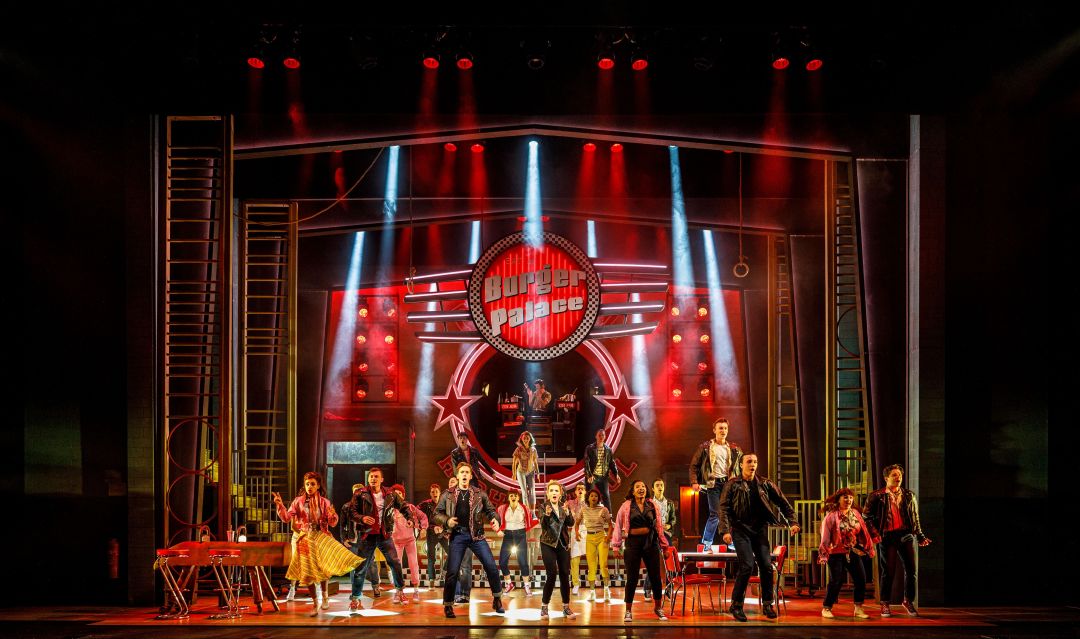 Can you believe we’ve never seen Grease – The Musical on stage? We’ve watched the iconic 1978 film hundreds of times but never have we caught the show on any tour. We are both fans of the classic film, I even enjoyed singing along to Cool Rider from Grease 2 for most of my youth (don’t judge!). So finally we were excited to see this production on stage, Directed by Curve’s Artistic Director Nikolai Foster and Executive Producer Colin Ingram.

With a Book, Music & Lyrics by Jim Jacobs & Warren Casey, Grease – The Musical first took to the stage in Chicago in 1971 where the script was based on Jim Jacob’s experience at William Taft High School. The original Broadway production opened in February 1972 where it went on to be nominated for seven Tony Awards, including one for Best Musical, and went on to play 3,388 performances, which was a record at the time. It arrived in the West End in 1973 with Richard Gere starring as Danny Zuko. The much loved film followed in 1978 with John Travolta and Olivia Newton-John in the lead roles.

The musical production is set in the 50s with teenagers that have to navigate the challenges and pressures of High School life. Danny Zuko, leader of the Burger Boys, meets Sandy Dumbrowki at the beach during summer break and they have a whirlwind summer romance. When wholesome Sandy joins Rydell-High, can their relationship survive the pressures of High School?

This Curve production is fresh, slick and modern as it delivers eye-catching sets, costumes and props (Scenic & Costume Design – Colin Richmond). With clever lighting design (Ben Cracknell) and Projection Design (Douglas O’Connell) the audience is treated to a visual delight as we are transported to the infamous Rydell High School. Musical Director, Dan Glover, and the Grease Band gave the well-loved classic songs a new lease of life. Arlene Philip’s Choreography is full of attitude with real company wow moments such as the Hand Jive and Shakin’ At The High School Hop.

Our Danny Zuko on the night was Dan Partridge who was charismatic and engaging in the leading man role, alongside Ellie Kingdon as Sandy who gave a charming innocence to the role with powerhouse vocals seen in Hopelessly Devoted To You. Paul French gave an effortlessly cool performance as my favourite Kenickie and had great chemistry with Tendai Rinomhota who delivered a sassy, confident performance as Betty Rizzo. What I enjoyed about Grease – The Musical is the fact we get more spotlights on the other characters in the show seen in Freddy My Love, Mooning and Those Magic Changes. Marty (Inez Budd), Jan (Maeve Byrne), Roger (Josh Barnett) and Doody (Alex Christian) are all given a chance to shine and those moments were highlights. Peter Andre was an instant audience favourite as Teen Angel and Vince Fontaine as he gave a new personable energy to those particular roles and did not disappoint the fans that had come out to specifically see him.

Grease – The Musical was a fantastic night out and I am glad that it was the Curve production we saw for our first experience of the show on stage. This was an outstanding touring company and production which left me wanting more as we jived our way out of the theatre.

Grease is still the word.

We say: “This electrifying production will leave you jiving your way out of the theatre! Grease is still the word.”