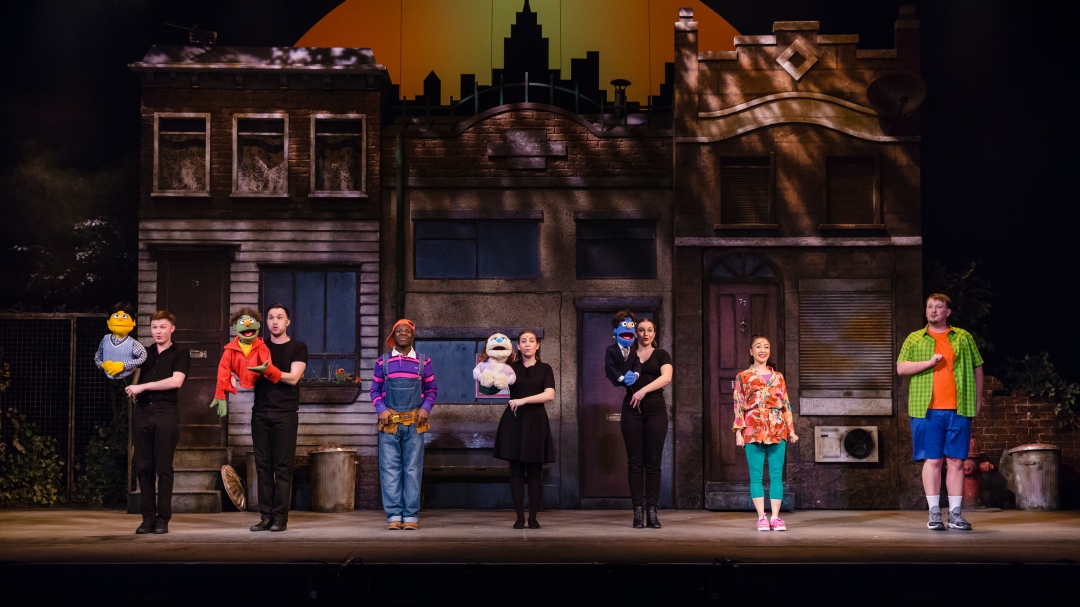 With music and lyrics by Jeff Marx & Robert Lopez (cocreator of the Book of Mormon and songwriter for Disney’s Frozen) and a book by Jeff Whitty, Avenue Q opened off Broadway at the Vineyard theatre in 2003 before transferring to Broadway in July of the same year. The production went on to win three Tony awards including best musical, moving to London’s West End in 2006 where it ran for five years before embarking on several international tours. In 2019 Selladoor Worldwide productions brings Avenue Q back to tour the UK.

Avenue Q tells the story of Princeton a graduate who moves into an apartment in downtown New York City (Avenue Q) where he meets other occupants who are trying to make sense of life and all its issues.

This parody of Sesame Street and The Muppet Show has been described by professional reviewers as a “musical like no other” and this is certainly the case. Richard Evans bright set transforms the viewer on to a familiar street reminding them of the well-known children’s series. Two TV screens sit high above either side of the stage and during the production words and numbers appear as the characters count and read to the audience. The cast of Avenue Q consists of 3 human and 9 puppet characters (puppets are designed by Paul Jomain of Q Puppets).

The songs are very funny and are delivered with perfect comedic timing by the wonderfully talented cast supported by an equally talented six-piece band under the direction of Dean McDermott.

The characters who live on Avenue Q are unforgettable, mischievous, may behave badly but are equally hilarious. Throughout the production the puppeteers remain on stage, dressed all in black, but I was so focused on the characters I forgot they were there.

There are strong performances from Lawrence Smith as Princeton and Rod (Smith has a fantastic voice) and versatile Tom Steedon who plays three characters (Nicky, Trekkie and one half of the bad bears duo).

Cecily Redman gave the outstanding performance of the evening as Kate Monster and Lucy the Slut. The transformation from girl next door to a sleazy nightclub singer, in the matter of seconds was very impressive. Redman has an exceptional voice and her delivery of There’s a Fine, Fine Line gave me Goosebumps. Cecily is our new one to watch and we can’t wait to see what she does next!

With memorable performances from a very talented cast, Avenue Q is a cheeky, daring, highly entertaining piece of theatre, which I thoroughly enjoyed and by the reaction of the audience around me, so did the Birmingham audience.

Avenue Q runs at the Alexandra theatre Birmingham from the 12th – 16th February when it continues its national tour.

We say: ” A perfect piece of five star puppetry! This production of Avenue Q is flawless and hilarious!”