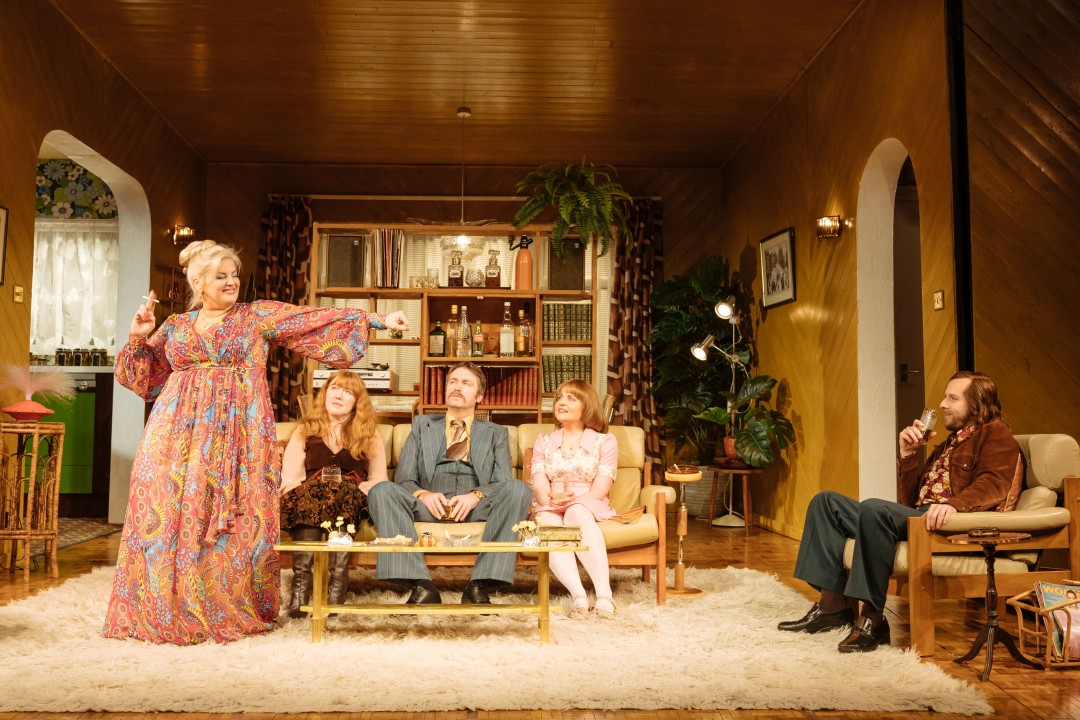 I first saw Abigail’s Party in 1977 when it was adapted for television as part of the BBC’s Play for Today series, which went on to become a classic piece of television drama and established Mike Leigh as one of my favourite playwrights and directors.

Set in the 1970s Abigail’s Party tells the story of Beverly and Laurence Moss who invite the new comers to the street, Angela and Tony Cooper, for drinks. Beverly also invites her divorced neighbour Susan Lawson, who has been banished from her home as her 15-year-old daughter Abigail is throwing a party.

As the drink flows the tension builds, as we enter the funny, awkward, sometimes uncomfortable to watch world of the five people gathered before us.

Director Sarah Esdaile used Mike Leigh’s method of improvisation to allow “the actors to feel a sense of ownership over their characters”.  This comes across in the performances given by each cast member.

Jodie Prenger is cast in the iconic role of Beverly and delivers a strong performance. Dressed in a flowing paisley print gown, Prenger controls the evening, manipulating and humiliating her guests as she offers snacks, opinions and frequent “top ups” of drinks. The audience around me were in fits of laughter throughout her performance.

There are good performances from Daniel Casey as Laurence Moss, trapped in a loveless marriage with a woman who publicly belittles him, and Calum Callaghan as monosyllabic bullying husband Tony Cooper, who becomes more animated as his Bacardi intake increases.

Rose Keegan also gives a strong performance as softly spoken divorced single mum Sue, who becomes the focus of pity from the other women.

Vicky Binns gives an excellent performance as Angela, delivering her role with a subtle comedic style. I could not control my laughter at the scene when Angela was asked to dance to a slow piece of music, Binns responded by performing a series of disco moves.  I also felt her pain when Binns is forced to watch her domineering bullying husband “slow dance” with Beverly, and then wanted to cheer with her as she proves herself to be a competent professional nurse when an emergency arises.

With engaging performances from this outstanding touring cast, Abigail’s Party is a nostalgic piece of classic comedy that gives an insight into relationships in the 1970s. According to the rousing applause on this cold January Monday evening, this was a performance thoroughly enjoyed by the Birmingham audience.

Abigail’s Party runs at the Alex Birmingham from the 21st – 26th January when it continues its national tour.

We say: “With engaging performances from this outstanding touring cast, Abigail’s Party is a nostalgic piece of classic comedy that gives an insight into relationships in the 1970s.”

How's everyone else doing in lockdown? We hope you are all okay and safe! We are making our own fun with our Mexican inspired evening of margaritas, tequila and Coco ❤️
Theatre means the world to us and we miss it so much right now. So proud to be part of such an amazing community. We are raising our glasses to Theatre today ♥️🎭
So glad we got to see this a few weeks ago! Jennifer was incredible and we loved Rose Wardlaw as Edith 🎭
Happy Mother's Day to the mama part of Theatretastic! Love you ❤️ Sending lots of love to everyone today who can't be together to celebrate due to what's going on in the world. Stay strong and stay safe ♥️
♥️
@magicgoeswrong 🎩 had me in hysterics! I'll never want to see a magic trick go right again 😂