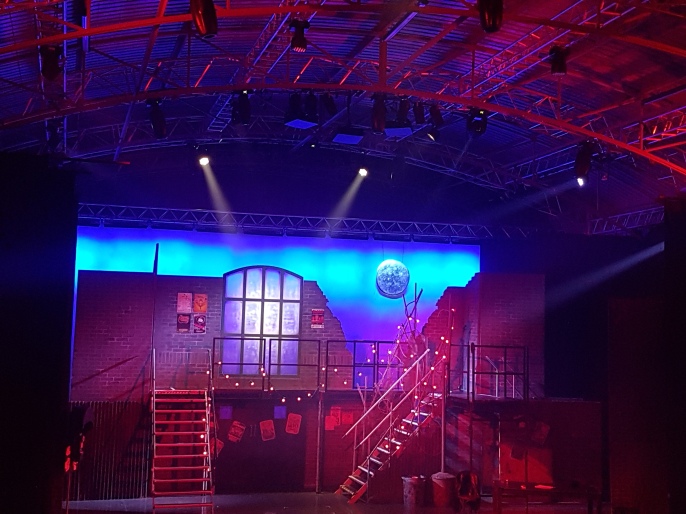 The award-winning Lichfield Musical Youth Theatre was formed in 1985 to provide opportunities for young people in the local area to take part in theatre activities. Their 2018 production of Rent is presented by 30 members of the company aged 16 and over.

With music lyrics and a book by Jonathan Larson, Rent is a rock musical based on Giacomo Puccini’s opera “La Boheme” and won the Tony award for best musical and the Pulitzer prize for drama in 1986.

Set in the late 1980s against the shadows of HIV and Aids, Rent tells the story of one year in the lives of an impoverished group of seven friends living a bohemian lifestyle in New York’s East Village.

Director Oliver Rowe and director and choreographer Jessica Lambert have created a piece of theatre that perfectly captures all the emotions associated with this iconic production, sparing no punches as the viewer is pulled immediately into the world of drug addiction, bigotry and poverty.

The one-piece set, and effective lighting designed by Anna Reddyhoff, transports the audience into the run-down apartments and the tough area of the East Side of New York City.

The exceptionally talented group of young people all worked well together with energy and professionalism, creating beautiful harmonies in the ensemble numbers that would not be out of place in our opinion on any professional stage.

The principle cast members all gave strong, professional quality performances. Adam Pritchard as Tom Collins had a memorable baritone voice with a rich warm tone. Luke Bryan perfectly captured the sass and warmth of Angel. Hattie Rumsey (Maureen Johnson) and Shannon Robinson (Joanne Jefferson) had wonderful chemistry with each other and their delivery of Take me or leave me was just fabulous. Chris Buckle in his last performance with the company gave a strong memorable performance as film maker Mark Cohen.

Tammie Morgan gave an outstanding performance as the vulnerable Mimi, her beautiful voice and excellent chemistry with Joseph Riley combined perfectly in the duet Without you.

Joseph Riley gave an outstanding performance in the demanding role of Roger Davies which involved Riley being on stage for the majority of the first act. Riley has fantastic stage presence, his wonderful singing voice combined perfectly with his accomplished acting skills resulting in an overall mature and professional performance.

In our opinion Lichfield Musical Youth Theatre’s production of Rent was the best performance from a non-professional company we have seen so far this year. We wish them every success for the future and we can’t wait for the next show!

Rent ran at the Forest Arts Centre Walsall from the 23rd -27th October. LMYT next production is Elf – The Musical JR 5-8th December at the Friary school theatre.

We say: “This was an exceptional production by a cast that would not be out of place on the West End stage. Lichfield Musical Youth Theatre’s production of Rent was the best performance from a non-professional company we have seen so far this year!”

The best weekend together ❤️ Front row at @frozenlondon and we were blown away ❄️☃️
It's not unusual 💕
First family theatre trip since 2020 😭
We had a fab time watching @youth_onstage production of #kippsthemusical last night!
Will I even make it to the interval?
Had a visit to the new immersive VR experience last night in Digbeth.