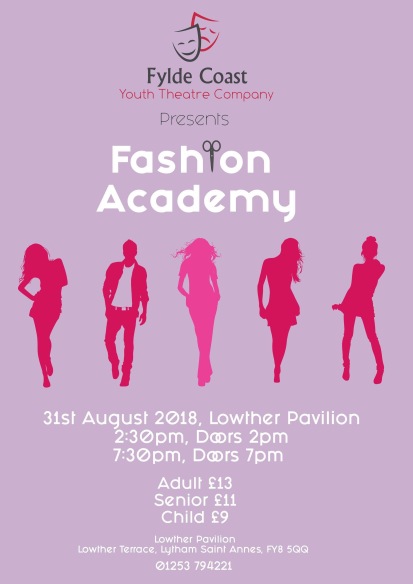 Founded in 2015 by director Debbie Parkinson Fylde Coast Youth Theatre is a non for profit theatre school based in Kirkham, Lancashire. The theatre school inspires its pupils whose ages range from 3-17 years old to “Get creative, Get confident, Get heard”.

The annual production for 2018 is the UK premiere of Fashion Academy.

With Music and Lyrics by Sabrina Chap, Fashion Academy the musical is based on the book of the same name by mother and daughter Sheryl and Carrie Berk.

The story focuses on Philadelphia girl Mackenzie “Mickey” Williams, who enrols in the Fashion Academy of Brooklyn to find that her colourful fashion style causes her to stand out from the other fashionistas. Mickey faces a hard choice of changing to fit in but will gaining acceptance of others come at the price of losing her own identity?

This is a fun musical with catchy infectious songs that linger when you leave the auditorium. The bright set design created a perfect back drop for this fashion obsessed musical with dresses and clothing hanging on the back of the stage. Principle Debbie Parkinson has directed a charming successful production which is perfect for this youth theatre. It is always refreshing to see a youth company perform material that is relevant to their age group.

The ensemble numbers and vibrant choreography by FCYT Choreographer Shea Roberts and led by Dance Captain Sofie Mawdsley Smith, were performed with energy and enthusiasm from this talented youth company. The ensemble vocals were wonderful in the group pieces. Although this musical didn’t have many ensemble numbers, it was an introduction to what this impressive group can do together.

The lead role of Mickey Williams was played by the exceptionally talented Maisie Brook. Maisie has a natural stage presence and a real likeable quality about her performance that transcends to the audience. Her beautiful vocal abilities were on show in this role and her performance of The Real Me was a standout performance of the production.

Mickey’s mother Joanna, Reese Hudson, and Aunt Olive, Cat Pallant had great chemistry with Maisie and with each other. The number Go Back performed by Maisie and Cat was lively and full of joyous energy.

The students at FAB all had individual unique personalities which were perfected by this cast. Sisters West and East played by Evie McCann and Olivia Marchese (2:30 p.m. performance) gave great comedic performances with their polar opposite personalities. Sebastian Price gave a fabulous performance as the sassy JC (not forgetting his muse ‘Madonna’). Jade Gardener as the YouTube star Brittany Pelota gave a confident and warm performance.

The popular girl in this production, Jade Lee, was played with confidence by Jessica Gibbons. Jessica captured the essence of mean-girl Jade and gave a splendid performance in this role.

One of our favourite performances of the production was by Jack Scholes as Mr Stitchman. Jack is one to watch in the future as he gave an outstanding performance as the strict fashion teacher at FAB. Jack had us and the rest of the audience laughing as he captured the grandeur of this over-the-top character.

We thoroughly enjoyed this UK premiere production of Fashion Academy by Fylde Coast Youth Theatre Company. This is a talented youth company with fantastic potential and we look forward to seeing them develop in confidence in their future productions.
MT & DT

We say: “A fabulous UK premiere of this fun, fashionista musical delivered by a wonderfully talented youth company!”