National Theatre: Angels in Am 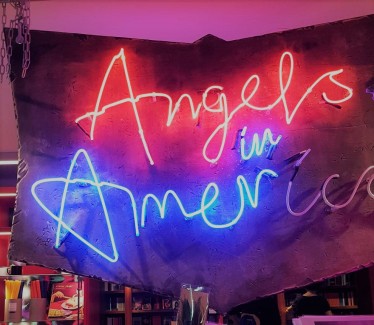 Angels in America, written by Tony Kushner, is set in the mid-1980s where the AIDS crisis and conservative Reagan administration are consuming America. We see the lives of New Yorkers struggle with life and death, mental health, loss, love, sex, heaven and hell. If you haven’t read the two plays I can thoroughly recommend them. It is amazing to see how Kushner’s work stands the test of time and still feels powerful in the present day.

I was too late to secure tickets to see last years production of Angels in America at the Lyttleton theatre, so I went to see Part One: Millennium Approaches at my local cinema. This was also my first National Theatre Live screening and I wasn’t sure what to expect. Part One is 3 hours and 30 minutes so I braced myself for a long evening in the cinema chair.

It was exciting to have intervals at the cinema again. The last time I had an interval at the cinema was when I went to see Jumanji in 1995. Only downside on this occasion – no one came out to sell ice-creams.

Part one was a magical experience for me. I just remember watching in awe as the cast captivated the audience and cinema goers supported by the superb direction of Marianne Elliott. I was hooked. Although I found the recording of part one live slightly clunky at times – the acting ability and visual design by Ian MacNeil made up for any technical glitches. I remember saying to my husband in the first interval that I had to experience part two at the National. Side note: When I get obsessed with a production my husband knows that nothing else will be on the conversation radar until I find a way of seeing it. It is fun being married to me.

Now obviously, Part two – Perestroika was sold out. National Theatre productions mostly always sell out. Cough ‘Network’ which was another fail for me. So always get tickets whenever you see there is any availability. My tip is do not wait. As mentioned, I do not give up easily. I would check every day throughout the day for tickets that had been returned and I advise for you to do the same if you find that something is sold out. There is still hope. When I secured two tickets to a random Wednesday performance of Perestroika I think my heart stopped for a moment. I didn’t have the time off work (neither did my husband), no train tickets, no hotel and a week to go. You have to love a bit of spontaneity when you are theatre crazy.

In the end none of it mattered as I had two tickets. I was going to witness the magic in person.

It lived up to the hype for me and more. Although Part two was 4 hours and 15 minutes, we had two 15 minute intervals and it felt like I was in there for a moment. When it was over I was not ready to leave. We sat in row R stalls and were in the centre of the row – the view was fantastic. The cast were incredible for this production of Angels in America. Nathan Lane excelled as the formidable Roy Cohn and Andrew Garfield was exceptional as Prior Walter. Denise Gough, who played the complex and heart-breaking Harper Pitt, is someone I want to watch on stage again and again. I am still sad to have missed her in People, Places and Things.

I witnessed theatre magic that night at the National Theatre. This was the first time I have been in a theatre where the lights go out and there is an instantaneous standing ovation in the dark.

If you can make it across the pond to see this production on Broadway – do it. I am still tempted myself.